Breast augmentation is the most prevalent cosmetic procedure in the United States, with estimates ranging that 1 to 3 million women have some type of breast implant. For years, there has been developing research about the possibility of implants increase the risk of certain cancers, but the evidence was considered too slim to create any action towards addressing the problem. 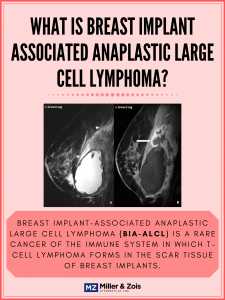 Now, the FDA has finally issued a safety warning about the risks of using breast implants manufactured by the company Allergan. The warning requested Allergan to recall all of their micro-textured implants in the United States, citing new sufficient evidence showing a link between their products and breast implant-associated anaplastic large cell lymphoma (BIA-ALCL). This recall will most likely cause a significant increase in breast implant cancer lawsuits, including class action lawsuits for medical monitoring.

The warning is not without precedent, as there have been similar recalls for Allergan breast implants in Canada, Australia, and France within the past year. However, the FDA was hesitant to issue on their own recall due to “insufficient evidence” that indicated a connection between textured implants and the rare lymphoma cancer. Despite this, hundreds of women around the country have been taking Allergan to court based on claims that their breast implants were the cause of their illness.

Allergan has complied with the new safety warning and agreed to recall their implants not only in the United States but around the globe as well. Based on the studies released by the FDA, it has been found that the risk of BIA-ALCL with Allergan’s textured implants is approximately 6 times greater compared to the risk of BIA-ALCL with other manufacturer’s implants. The report claimed that the continued distribution of the implants would “likely cause serious, adverse health consequences and potentially death” from cancer.

According to FDA statistics, there are at least 573 known cases of BIA-ALCL, which resulted in 33 deaths. Out of those cases, 481 have been linked to Allergan’s breast implants, showing a significant and deadly connection. Before the warning came out, a 2017 study published in the medical journal Plastic and Reconstructive Surgery suggested that textured breast implants can increase the risk of BIA-ALCL by 10 to 14 times, compared to smooth breast implants. This new research, coupled with the public outcry by women affected by this complication, places Allergan in a difficult position that is likely to be littered with new lawsuits.

Women with textured implants manufactured by Allergan are not recommended to get the implants removed unless they start experiencing adverse reactions. Regulators instead recommend women inform themselves about the warning signs and symptoms of BIA-ALCL, which include persistent pain or swelling near the implant. The specific products recalled from Allergan include their Natrelle Saline-Filled Breast Implants, Natrelle Silicone-Filled Textured Breast Implants, and Natrelle 410 Highly Cohesive Anatomically Shaped Silicone Filled Breast Implants. You can find a complete list of all affected products in the linked safety warning.

Any questions about the safety of breast implants can be directed to the Division of Industry and Consumer Education (DICE) by either their email DICE@FDA.HHS.GOV or by calling them at 800-638-2041. Cases of BIA-ALCL caused by breast implants should be reported to the FDA MedWatch Adverse Event Reporting Program.

Our attorneys regularly represent clients who have been injured by defective medical devices. The FDA safety warning and recall of the Allergan Biocell breast implants will probably lead to many lawsuits being filed over the next year.

The Allergan Biocell breast implants lawsuit has its roots in the late 1990s, when the first lawsuits were filed against the company. The lawsuits alleged that the implants were prone to rupturing and that the silicone used in the implants was toxic and caused serious health problems, including autoimmune diseases and cancer.

In response to these concerns, Allergan conducted extensive studies and clinical trials, and in 2010 the company received FDA approval for the Biocell implants. The company touted the Biocell implants as a safer and more effective alternative to other breast implants, and the implants became popular among women seeking cosmetic surgery.

However, despite the FDA approval, concerns over the safety of the Biocell implants continued to grow. In 2016, the FDA issued a warning about the implants, stating that the agency had received a large number of reports of ruptures and other complications associated with the Biocell implants. The FDA also stated that the implants had a higher rate of ruptures than other types of breast implants.

In response to the FDA warning, a wave of lawsuits was filed against Allergan, with many women alleging that the implants had caused serious health problems and that the company failed to properly warn consumers about the risks associated with the implants. The lawsuits were filed in state and federal courts across the country, and many of the cases were consolidated into multi-district litigation in the Southern District of Texas.

The Allergan Biocell breast implants lawsuit has been ongoing for several years, with many of the cases still in the discovery phase. However, despite the ongoing litigation, Allergan has continued to sell the Biocell implants and to defend itself against the lawsuits.

In 2020, Allergan reached a settlement with a number of plaintiffs, agreeing to pay $5.5 million to resolve the lawsuits. The settlement resolved a portion of the lawsuits and provided compensation to some of the plaintiffs, but many cases remain pending.

In addition to the lawsuits, the Allergan Biocell breast implants have also been the subject of regulatory action. In 2019, the FDA issued a recall of the Biocell implants, citing concerns over the implants’ rupturing and the potential for silicone to leak into the body. The recall was a significant blow to Allergan, and the company has faced criticism from consumers and regulators over the safety of the Biocell implants.