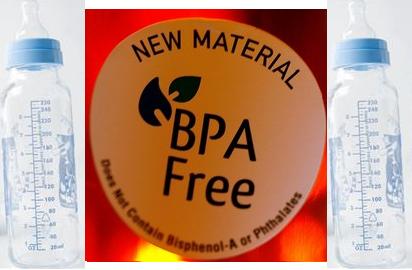 Bisphenol-A (BPA) is a chemical used in the production of polycarbonate plastics and epoxy resins, and until recently it featured largely in baby bottles. In 2008, the public consciousness was flooded with reports that BPA leeches from bottles into liquid (more or less, depending on the temperature of the liquid). Other reports have indicated the potentially dangerous effects of BPA. In April 2008, the National Toxicology Program’s Center for the Evaluation of Risks to Human Reproduction (part of the National Institutes of Health) drafted a brief concluding that exposure may affect human development (including early puberty, prostate gland changes, behavioral changes) or reproduction.

The concern for babies is that they have potentially the highest BPA intake—on a pound-for-pound basis, they consume more than adults and additionally suck on plastic items that increase the risk of exposure. In rodent tests, there is evidence that young animals cannot metabolize the chemical as efficiently, and therefore have higher concentrations in their blood.

While the FDA was initially lukewarm about BPA concerns, it has raised the temperature of its response by announcing last week that “on the basis of results from recent studies using novel approaches to test for subtle effects, both the National Toxicology Program at the National Institutes of Health and FDA have some concern about the potential effects of BPA on the brain, behavior, and prostate gland in fetuses, infants, and young children.”

Other studies, however, have refuted any harmful causes of BPA, including one from the Environmental Protection Agency.

On the litigation front, MDL 1967: In Re: Bisphenol-A (BPA) Polycarbonate Plastic Products Liability Litigation was transferred to the U.S. District Court for the Western District of Missouri (Judge Ortrie D. Smith) on August 13, 2008. The allegations against bottle manufacturers and baby formula manufacturers (retailers were dismissed) at the time of transfer were that BPA is toxic, and may cause cancer. In November of last year, the judge dismissed all the formula defendants and ordered the parties to submit dates for completion of discovery, filing of motions for class certification, and other motions.

Whether this is overly paranoid or not, most people (especially parents) are taking the safe road, and avoiding baby products containing BPA.

Our law firm is not involved in these cases.