Recent studies suggest associations between the anti-epileptic drug Depakote and adverse health effects. One study found that it increased the death risk in post-stroke epilepsy patients. Another found an association between Depakote use during pregnancy and the Autism and ADHD risk in children. In addition, individuals have filed lawsuits in France against Sanofi, the European manufacturer of Depakote.

Valproate, known by the brand name Depakote, is an anti-epileptic medication. It treats symptoms associated with epilepsy, seizures, bipolar disorder, and migraines. Depakote comes in 125, 250, and 500 mg delayed-release tablets, 250 and 500 mg extended-release tablets, and 125 mg sprinkle capsules. The Chicago-based biopharmaceutical giant AbbVie manufactures this drug in the United States, while Sanofi manufactures it in Europe. 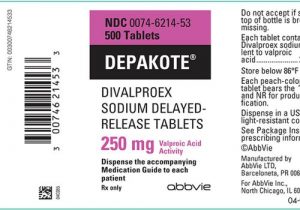 Common Depakote side effects include:

In a December 13, 2021, JAMA-published study, Norwegian and Swedish researchers found that cardiovascular death risk in post-stroke epilepsy patients who were treated with Depakote was 40 percent. They studied the effects of the anti-seizure medications, including Depakote, Dilantin, Keppra, Lamictal, Oxtellar XR, Phenytek, Tegretol, and Trileptal. Their data comprised Swedish adults who suffered a stroke between July 2005 and January 2010 and epilepsy before January 2015. The researchers further narrowed their data to 2,577 anti-seizure medication patients. Their data showed that Lamictal, Keppra, and Tegretol decreased the patient death risk. By contrast, Depakote increased the death risk by 40 percent. Dilantin, Oxtellar XR, Phenytek, Trileptal increased the death risk by 16 percent. The researchers concluded that their findings suggested that death rates varied by medication.

Depakote’s association with and autism and ADHD

A December 15, 2020 study in Neurology found that Depakote use during the first trimester increased the autism and ADHD risk. Indiana University-based researchers examined Swedish-register data that comprised over 14,000 children born to epileptic mothers between 1996 and 2011. They found that over 22 percent of mothers used anti-seizure medications during their first trimester. The researchers’ data showed that Depakote increased the autism and ADHD risk. By contrast, they found no increased autism and ADHD risk for Lamictal and a statistically insignificant association for Tegretol. The researchers’ data suggested that some anti-seizure medications were safer for pregnant women than others.

Depakote use in pregnancy’s association with long-term academic performance

A JAMA-published study from February 2018 showed that prenatal exposure to Depakote negatively impacted a child’s long-term academic performance. Researchers examined data that comprised over 650,000 Danish children born between the years 1997 and 2006. They identified over 1,400 children who were exposed to various anti-seizure medications, including Depakote, Luminal, Trileptal, Lamictal, Klonopin, and Tegretol. Their data showed that Depakote- and Klonopin-exposed children scored poorly on sixth-grade math and Danish tests compared to Lamictal-exposed and unexposed children. They also found that Luminal, Lamictal, Tegretol, and Trileptal were not associated with poor test scores. The researchers recommended that women of childbearing capabilities not take this Depakote.

FDA’s May 2013 safety announcement on Depakote

The FDA’s May 6, 2013 safety announcement warned pregnant women against taking Depakote for migraines. It reported that taking the drug could result in lower IQ scores in children. The agency also announced that the drug’s manufacturers will include warnings of this risk on labels. It advised that Depakote patients of childbearing age should take birth control. The FDA advised healthcare professionals to not prescribe the drug to pregnant women for migraines and only prescribe it to pregnant women for epilepsy if alternative treatments were inadequate.

In February 2020, French prosecutors charged Sanofi Aventis with unintentional injury and aggravated fraud. They alleged that the pharmaceutical giant failed to inform the public on the association between Depakine, sold in the United States as Depakote, and birth defects. Depakine is sold in the United States as Depakote. French authorities began investigating the drug in September 2016. During that time, regulators also criticized Sanofi and ANSM, the government agency that regulates pharmaceuticals, for their slow responses to Depakine’s adverse side effects. Individuals also filed lawsuits against Sanofi, alleging that it misled the public on the drug’s safety. They also claim that the agency knew of its adverse effects and attempted to conceal them. Sanofi welcomed the case’s advancement. However, it claimed to have “always complied with its duty to inform and been transparent.”

In August 2020, French authorities indicted Sanofi with manslaughter for failing to report on Depakote’s birth defects. These charges were separate from the unintentional injury and aggravated fraud charges against the pharmaceutical giant. Sanofi denied any wrongdoing. It argued that it already warned authorities of Depakote’s adverse effects almost 40 years ago. Sanofi also contested the proceeding’s validity.