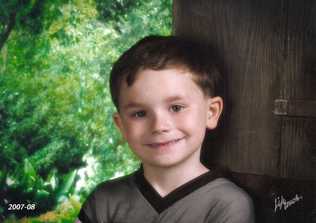 Gabriel Myers, age 7 and in the Florida foster care system, deliberately hanged and killed himself with a detachable shower hose.

My wife and I recently signed up for foster care here in Baltimore, and we have been taking care of our first foster care child (an infant) for the past 3 months. Foster care is the temporary placement of a child, typically while the parent gets his or her life together in order to better care for the child. As we went through the process, we met a lot of foster care parents and learned that many children are placed in foster care because they are physically, emotionally, or sexually abused; or because they are neglected. The older the children are when they have been pulled away from their parents, the more likely it is that they will have significant emotional and psychiatric injuries.

So, this is an issue I feel strongly about. Children taken away from a volatile situation need the best care possible and need to be safe and loved. Recent reports from Florida show that many children who have had tumultuous lives are being put on psychotropic medication when they enter the foster care system. In fact, an astounding number of children in the Florida Department of Children and Families are on these drugs:

Tellingly, a fewer percentage of foster care children who live with relatives or family friends are taking psychotropics—about 12%. And that number even feels high.

Gabriel was in the Florida foster care system. He had one of those tumultuous lives—his mother was found slumped over in her car, surrounded by narcotic drugs. He was molested prior to entering foster care. Then he was rescued. But not really. He was put into foster care, and regularly saw caseworkers, therapists, and a psychiatrist. However, their solution was to note his declining condition, to treat him only for his sexually inappropriate behaviors (likely the result of his own molestation), and to give him psychotropic medications (he had been taking Adderall, Vyvanse, Lexapro, and Symbyax at various times). Those drugs were never approved by a judge or Gabriel’s mother, as required by Florida law. Those drugs acted as chemical restraints to sedate him and make it easier to manage him (Gabriel was diagnosed with ADHD). Gabriel was never given the proper counseling to the exclusion of, or even in addition to, those drugs. He could have been rescued.

Psychotropic drugs are dangerous. They can cause deepening depression, and suicide is one well-known result. Part of the national travesty is that drug makers frequently market their drugs for use in children, which is oftentimes unapproved by the FDA (“off-label use”). They do this because parents, teachers, and apparently sometimes foster care systems want to control children’s symptoms, and take the easy way out of treating their real injuries. As a result, drug makers can sell more drugs. For example, Seroquel (which is given to children in Florida foster care, click here), is approved for schizophrenia and acute manic episodes associated with bipolar disorder. It is not approved for children but has been marketed for use by children.

For more on Gabriel Myers, see the Gabriel Myers Work Group, tasked by the Department of Children and Families to investigate the facts surrounding his death.