What triggered our involvement in these cases was a congressional investigation last year that revealed that many popular brands of baby foods in the U.S. contain dangerously high levels of toxic heavy metals such as lead, mercury, and arsenic. Scientific evidence and studies have shown that consumption of these metals during infancy and early childhood can cause neurologic damage and autism.

Product liability lawsuits are now getting filed across the country against baby food manufacturers. These baby food autism lawsuits allege that the manufacturers knowingly sold their products with unsafe levels of toxic metals and that the plaintiffs developed autism spectrum disorders from consuming them in their baby foods.

June 2022: A California judge rejected an effort by the defendants in a toxic baby food lawsuit to discredit the plaintiff’s expert testimony on causation and have the case thrown out. The decision came in the case of NC v. Han Celestial, et al. (Superior Ct. of Cal., Los Angeles Cnty. – 21STCV22822), in which the plaintiff is claiming that his autism was caused by toxic metals in the defendants’ baby foods. The plaintiff retained 4 expert witnesses to establish that exposure to heavy metals in baby foods could contribute to autism and/or ADHD. The defendants attacked the scientific credibility of these expert opinions and moved to have all 4 expert witnesses excluded from the case. In a lengthy, well-reasoned opinion, the judge denied that motion and allowed the case to proceed. This ruling is a significant step forward for the plaintiffs in toxic baby lawsuits.

May 2022: Retail giant Walmart is becoming increasingly involved in the toxic baby food litigation. Recently a federal judge in California ruled that plaintiffs could move forward with a proposed class action against Walmart alleging that its Parent’s Choice brand baby food contains toxic metals. Independent lab testing by a non-profit group confirmed that Walmart brand baby food products contain toxic metals that have been linked to autism and neurologic disorders.

An organization called Happy Babies Bright Futures (“HBBF”), published a report in October 2019 detailing the shocking results of extensive product testing performed on 168 different baby food brands in the U.S. The testing revealed that almost all the baby food products contained toxic heavy metals such as mercury, arsenic, and lead. A large percentage of these baby foods products contained these metals at extremely high levels, often 100-200 times above the maximum safe levels set by the FDA.

The contaminated baby foods products with unsafe levels of these toxins included traditional spoon-fed baby foods in jars or pouches such as carrots, mashed peas, and sweet potatoes. Other types of baby foods such as “puffs” and snacks made with rice flour were also included.

The HBBF report prompted an investigation by the U.S. House of Representatives Subcommittee on Economic and Consumer Policy.  In February 2021, the Committee issued a detailed investigative report entitled Baby Foods are Tainted with Dangerous Levels of Arsenic, Lead, Cadmium, and Mercury (the “Congressional Report”). The Congressional Report confirmed the results of the HBBF testing regarding the dangerous levels of toxic heavy metals in a wide range of baby foods.

What was most surprising – actually, depressing is a better word – about the Congressional Report, however, was that most of the baby foods companies were fully aware that their products contained toxic metals at these levels, but sold them anyway.

Which Baby Foods Had the Highest Levels of Heavy Metals?

Although the Congressional Report identified toxic metals in over 150 different baby foods, there were a few brands that has extremely high levels of these metals. These included: 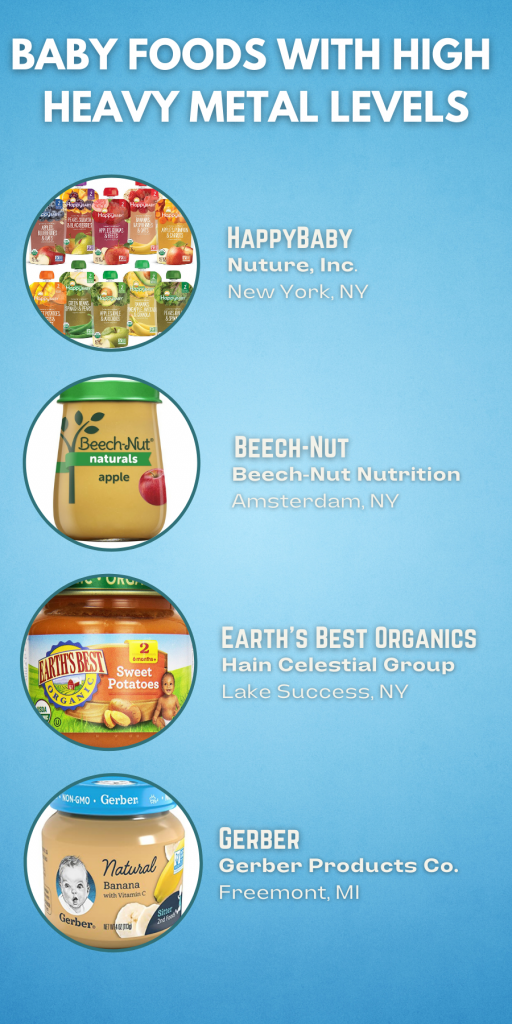 The levels of heavy metals found in testing on over 150 different baby food brands and products are detailed in the Congressional Report.

Although we do not entirely understand the exact causes of autism spectrum disorder (“autism”), recent evidence has emerged which indicates very strongly that consuming certain toxic metals during infancy or early childhood can cause autism.

A series of scientific studies published over the last 10 years have consistently found a positive association between toxic heavy metals exposure (particularly during early childhood) and the development of autism.

One of the first major studies on this topic was released in 2014. This study determined that environmental exposure to mercury during early childhood resulted in a “twofold increase” in the risk of developing autism. A cohort study of children in Korea published in 2017 found a similar causal link between mercury exposure and autism spectrum disorder.

A research team from the University of Buffalo released the results of an extensive study in 2019 on the connection between childhood exposure to arsenic and the subsequent development of autism. The researchers concluded that there was strong evidence supporting a positive association between consumption of inorganic arsenic in young children and autism. They observed identical results in another systematic review and meta-analysis published in 2020 by researchers at the State University of New York.

The alarmingly results of the Congressional Report regarding the levels of toxic metals in baby foods products have sparked a growing number of product liability lawsuits against baby foods manufacturers. These lawsuits are being brought by parents who claim that their children developed autism because of consuming toxic heavy metals such as lead, mercury, or arsenic in their baby food.

One of the key allegations in these autism lawsuits is that the manufacturers actually knew about the levels of toxic metals in their products but sold them anyway. This claim is fully supported by information in the Congressional Report confirming that many baby food makers performed internal testing on their products which revealed high levels of heavy metals. According to the report, the companies simply ignore these testing results.

Another central element of these baby food autism lawsuits is the scientific evidence on the connection between autism and exposure to heavy metals. To prevail, the plaintiffs in the baby food lawsuits will need to establish scientific evidence of causation. To do that they will need expert witnesses to testify that their children probably developed autism because of the heavy metals consumed in the baby food products.

Most of the complaints filed in baby food autism lawsuits so far contain a very detailed description of the existing scientific support for the link between autism and heavy metal exposure during childhood. They also rely heavily on factual allegations and testing results set forth in the Congressional Report.

Call Us About Filing a Baby Food Autism Lawsuit

If your child has been diagnosed with autism and you believe it may be related to the ingestion of heavy metals in baby foods, you may be able to file a lawsuit and seek financial compensation. Call our product liability lawyers at 800-553-8082 or contact us online.