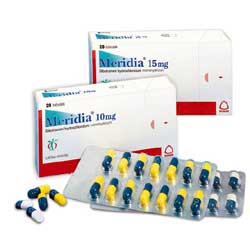 The results of a six-year trial on Meridia’s active ingredient, sibutramine, show a statistically significant increase in heart attacks, strokes, and death. Meridia, manufactured by Abbott Laboratories, was approved by the FDA in 1997 as a prescription-only weight loss supplement.
The SCOUT study (Sibutramine Cardiovascular Morbidity/Mortality Outcomes in Overweight or Obese Subjects at Risk of a Cardiovascular Event—we don’t understand the acronym, either) is a post-marketing surveillance study required by the European Medicines Agency as a condition for approval of the drug. They enrolled 10,000 patients in the study, with 5,000 taking a placebo and 5,000 taking sibutramine. It was designed to show that weight loss with sibutramine was more effective in reducing cardiovascular events. The study shows just the opposite, however. The FDA has indicated that, upon an initial review of the study, sibutramine-use is associated with a 1.4% increase in adverse cardiovascular events. This is statistically significant, especially because in the past year there have been 294,000 prescriptions for Meridia (only one version of the drug) in the United States. 1.4% of 294,000 is 4,116 cardiovascular events, which may include death. The FDA’s Adverse Event Reactions (AERS) database shows that there have been 84 reports of death from cardiovascular causes. Of those 84 deaths, 11 were under the age of 31.

Meridia is contraindicated for patients with pre-existing coronary artery disease, congestive heart failure, peripheral arterial occlusive disease, arrhythmia, and cerebrovascular disease. The European Medicines Agency will review the study in January 2010. Likewise, the FDA indicated in its November 20, 2009, Early Communication that it is reviewing the data and “is conducting an expedited safety review.”

Public Citizen has re-petitioned the FDA for recall of the drug based on the results of the study. It asked for a recall twice before, in 2003 and 2005. The 2005 FDA denial letter specified that:

An unbiased, objective assessment of sibutramine’s cardiovascular safety profile, particularly when used in obese patients with known or occult cardiovascular disease, can best be made through analysis of data from a large, randomized, controlled trial. The Sibutramine Cardiovascular Outcomes, or SCOUT study, is such a trial.

So, now the FDA has everything they need to make a recall. Our bet is that they don’t pull the trigger, however. We hope we’re wrong.