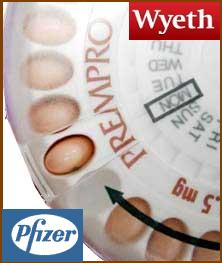 Since Monday, there have been decisions in two hormone therapy cases. Here are the details:
Monday, February 22-Audrey Singleton: In the Philadelphia Court of Common Pleas, a jury found for the Plaintiff and against Pfizer/Wyeth. The verdict, which came after a four-hour deliberation, was for $9.45 million ($3.25 in compensatory damages and $6 million in punitive damages, with $200,000 to the plaintiff’s husband for loss of consortium). The plaintiff was on hormone therapy for six years, before being diagnosed with breast cancer, which is currently in remission. Notable about this case is that the plaintiff was on hormone therapy for about a year and a half after the release of the WHI study showing that Prempro increases the risks of cancer. Plaintiff’s lawyers stated that this verdict confirms Wyeth’s actions after the release of the study were irresponsible and negligent.

Wednesday, February 24-Cheryl Foust: Also in the Philadelphia Court of Common Pleas, this case was a defense verdict after six hours of deliberations, on the basis of specific causation. We linked to this case previously—it is the one where the plaintiff’s twin sister also took hormone therapy but did not get breast cancer (both argued that this fact supported their position). Plaintiff was successful in convincing the jury that Wyeth was negligent by not properly warning Ms. Foust’s health care providers about the risks of Prempro and that the failure caused the health care providers to prescribe the drug to Foust. However, the jury found that the drug did not cause her breast cancer. Ms. Foust succumbed to her cancer at the age of 56; the case was brought by her widower.

As far as jury trials go, Pfizer has lost seven of the past 11. Many cases are up on appeal, and there are still something like 1,500 left to go in Philadelphia. Click here for prior blog posts on hormone therapy drug lawsuits.