We’ve been fielding questions lately about the cardiac stents that have been all over the news here in Baltimore. One of the inevitable questions is whether the stent is defective. There’s no indication that the stents implanted at St. Joseph Medical Center are defective—in fact, there is no evidence that the stents are of any particular brand or manufacturer. A few years back there was a discussion about defective Johnson & Johnson Cypher Stents, which one Cleveland Clinic study showed to be four to five times more likely to cause blood clotting. The issue here is not one of the defective stents, but rather medical malpractice.

Though it is outside the scope of this blog, it does touch close to home, happening here in Maryland. And we’ve been fielding questions about these stents, so this is as good a forum as any. So, a little discussion.

First, the background: Towson hospital St. Joseph’s Medical Center sent letters to 369 patients last month, advising them that their cardiac stents, implanted by Dr. Mark Midei, may have been unnecessary. Props to St. Joe’s for recognizing that they have “a moral and ethical responsibility to inform these patients of what happened. This is consistent with our mission and core values. It was the right thing to do.” 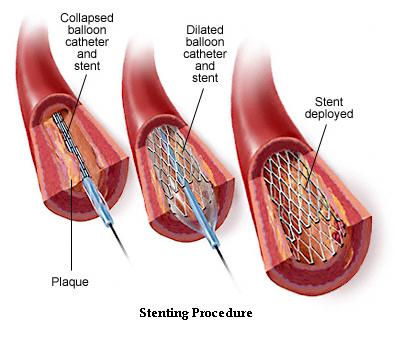 Coronary stents are used to open clogged arteries, and the standard of care reported by physicians is that they should not be used for arteries that are less than 70% occluded by plaque (determined by a pre-stenting catheterization film). Reports indicate that some stenting at St. Joe’s may have been done for patients with as little as 10% blockage. Stenting procedures typically run about $10,000.00. The risks of stenting operations are:

The letters sent by St. Joe’s were prompted by a federal investigation into Medicare fraud. A patient complaint led investigators to Dr. Midei (who previously lost in a jury trial for, to the tune of $5 million, in a medical fraud lawsuit). Dr. Midei led the cardiac catheterization unit at St. Joe’s until last summer. He has stopped practicing for now, and his privileges at St. Joe’s have been revoked.

So, as expected, there are a lot of attorneys advertising for these cases right now. My thoughts on attorney advertising are that they should be tasteful and dignified. Beyond that, it is important for attorneys to advertise from a public awareness perspective. One of the worst parts of my job is having to tell someone who walks in my door that that tragic thing that happened to them, whether it be caused by a disabling product defect, life-changing medical malpractice, or serious automobile collision, happened too long ago and is barred by the statute of limitations (every state has a statute of limitations that prohibits lawsuits after a certain amount of time has passed). These attorney advertisements help to get the word out while the surgical stenting operations are recent, and patients can then decide how they would like to proceed, and if consulting with an attorney is in their best interests. So, nevermind the naysayers, like Baltimore Sun’s financial columnist, Jay Hancock, whose blog post leaves the impression that if his wife had unnecessary $10,000 stenting surgery, he’d just let bygones be bygones. I do love one comment on his blog, by medical doctor Michael Kirsch (emphasis added):

Someone close to me was one of those stent recipients. In this case, they received one too many, at least. The averages of stents per year went way above the norm during 2008 for that hospital (St. Joseph’s). That is why an investigation was held and is ongoing. It has been determined that unnecessary stent placement was performed by one surgeon. Having to go on blood thinner unnecessarily is not a joke. Being in a hospital overnight is not cost-effective when it isn’t necessary. Having an unnecessary operation that requires weeks off from work and using sick leave, etc., when it could have been used for something else that really existed. The reason costs are spiraling out of control. I think we all need to look at who is responsible. … As far as other professionals being in attendance during the surgery, who knows what was or what was not shared in that room. You can be right next to a thief and not realize he had stolen anything. Not all doctors are saints, and not all average citizens are either. That’s why there are lawyers. Try to litigate a case on your own and see how far you get. As far as can this procedure harm or kill a person in the future? You betcha! The risks are there.

Anyway—have a great weekend, everyone.