Thousands of women who developed mesothelioma or ovarian cancer after extended use of talcum powder products have filed talcum powder lawsuits against Johnson & Johnson alleging that it knew about the dangers of talc and failed to warn them.

Recently, a jury in Oakland, California awarded 35-year-old Christina Prudencio $26.5 million for pain and suffering, plus another $100,000 in punitive damages in her talcum powder lawsuit against Johnson & Johnson.

In this post, we will take a brief look at the story behind the talcum powder litigation and discuss the details of the case that resulted in this recent verdict.

About the Talcum Powder Lawsuits Against Johnson & Johnson

Talc is a mineral that often has asbestos. We have known for years that asbestos exposure leads to many diseases, including ovarian cancer, specifically epithelial ovarian cancer, and mesothelioma cancer.

Not surprisingly, scientific studies have shown that using talcum powder products such as Baby Powder, Shower to Shower and others can cause ovarian cancer in some women.

Since the first studies linking talcum powder to cancer were made public, thousands of product liability lawsuits have been filed against J&J.

So far, over 36,000 individual talcum powder lawsuits have been filed in federal court and consolidated into the Talcum Powder MDL that are consolidated in U.S. District Court in New Jersey.

In October 2020, Johnson & Johnson announced it has agreed to pay $100 million to settle 1,000 of these cases. More bulk settlements from J&J are expected to follow.  Meanwhile, individual talcum powder cases are going to trial in California and many other state courts.

Christina Prudencio was one of many women to file a talcum powder lawsuit against Johnson & Johnson. Prudencio, a 35-year-old mother, and resident of the bay area in California, regularly used J&J’s talcum products such as Baby Powder for years starting in her childhood.

In 2020, Prudencio was diagnosed with mesothelioma, a type of cancer that is only known to be caused by exposure to asbestos. She underwent surgery and various other treatments, but mesothelioma is generally a terminal type of cancer.

Prudencio eventually brought a product liability lawsuit against Johnson & Johnson alleging that her mesothelioma was caused by asbestos in the J&J talcum powder products she used for years.

The case was fast-tracked for trial because Prudencio was not expected to live much longer. The trial in the Superior Court for Alameda County began via Zoom on June 15.

Lawyers for Prudencio explained to the jury that her terminal mesothelioma was caused by Johnson & Johnson’s policy of ignoring decades of proof that its talcum powder products were not safe.

Prudencio’s lawyer laid out a long, detailed timeline of events showing how J&J executives systematically and repeatedly refused to acknowledge the fact that their talcum products were contaminated with asbestos. 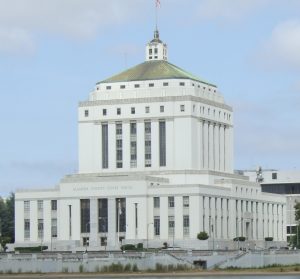 Among the incidents presented by Prudencio’s lawyers was a 1971 research memo confirming that chrysotile asbestos was found in J&J’s talcum products, and a 1976 incident in which J&J pressured executives at Mt. Sinai Hospital in New York to publicly reverse their own findings that talc contained asbestos. In their closing arguments at trial, Prudencio’s attorneys argued that a “reasonable company” would have pulled their talcum powder products from the market back in the 1970s.

Instead, however, J&J continued to keep their talcum products on retail shelves until 2020 when they finally made the decision to discontinue them in response to litigation. The defense team for J&J argued that Prudencio’s mesothelioma was not caused by Baby Powder, but rather the result of a genetic mutation.

Following an exhausting 2-month trial, in August 2021 the jury came back with a verdict that found J&J liable for Christina Prudencio’s cancer and awarded her $26,400,000 in economic damages and pain & suffering damages. The jury also found it appropriate to penalize Johnson & Johnson with an additional $100,000 in punitive damages, a clear indication that J&J’s actions offended the jurors.

What is the status of the talcum powder lawsuits?

The talcum powder class action MDL lawsuits against Johnson & Johnson (and other manufacturers) are currently still ongoing. Over 30,000 individual talcum powder lawsuits have been filed across the country and consolidated into the Talcum Powder MDL. Johnson & Johnson announced in 2020 that it has agreed to pay $100 million to settle 1,000 of these cases. More bulk settlements from J&J are expected to follow.

How much are talcum powder lawsuits worth?

This is probably a good indication of the likely settlement value of the remaining talcum powder lawsuits although I suspect the second round of settlements will be higher than the first.

Is it too late to file a talcum powder lawsuit?