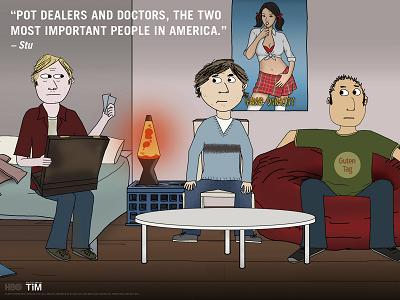 I saw a link the other day to CNBC’s “Pharma’s Market” by Mike Huckman titled The Funny Business of Selling Drugs. Unsure if it was truly funny or more simply “funny” in the sense of “something funny is going on here,” I clicked the link.

Turns out it’s a little of both. It’s a brief article about an HBO Comedy, “The Life and Times of Tim” (which, admittedly, I’ve never seen nor heard of).

According to the article, one episode has the following premise:

The show is a bawdy, hilarious send-up of doctors’ offices that are overrun by so-called “Meals on Heels.” That’s industry slang for the stereotypical short-skirted, wheely-bag toting, lunch-catering drug sales reps.

As funny as it may (or may not) be, there is usually a little truth behind most jokes. The description of the episode seems to be an indictment of sorts against the way things are done in the Pharm industry–drug companies selling their wares by plying doctors with gifts–little things, like office supplies, stress balls, gadgets, and trips to Hawaii. Is there a better way to keep doctors informed about your products? Well, we’re all human, and without a personal incentive, we may not have any interest in learning about these products (I routinely refuse to see vendors who “stop by” the office without an appointment, though some in my office love to spend 30 minutes chatting for some complimentary swag).

Bribery (and that’s what it is) doesn’t exactly send the right message. I’m sure the drug companies will defend the practice, saying that doctors use their independent judgment, and they are using the gifts as a means to get in the door so they can have a really serious sit-down, but what human wouldn’t want to “earn” the free gifts, or at least repay the favor? Surely there is a better way…