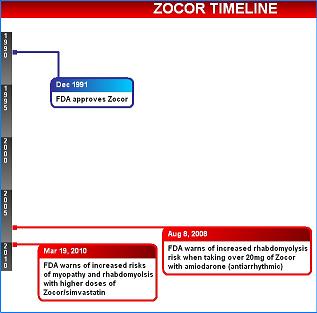 The results of a new study are out, which show the dangers Zocor in high doses or in conjunction with other drugs. Zocor is indicated as one component of multiple risk factor intervention for people at significantly increased risk of atherosclerotic vascular disease due to hypercholesterolemia. Evidence shows that high levels of Zocor, more so than similar cholesterol-reducing drugs (statins), can cause myopathy and rhabdomyolysis, which can cause severe kidney damage, kidney failure, and death. If this evidence keeps coming, don’t be surprised to see a Zocor recall or withdrawal (or Merck simply stops putting new products on the shelves). In fact, more evidence has accumulated about Zocor since this blog post in 2010 and our lawyers are not reviewing potential Zocor lawsuits

Myopathy is a muscular disease that causes muscular weakness. Rhabdomyolysis is a very specific type of myopathy, the rapid breakdown of skeletal muscle because of muscle tissue injury. The broken-down material can be released into the bloodstream and may cause acute kidney failure. Signs and symptoms for myopathy include unexplained muscle fatigue, muscle pain, tenderness, and an elevation of a muscle enzyme in the blood (creatine kinase). Rhabdomyolysis is often characterized by fatigue and dark or red urine, besides the symptoms of myopathy.

Merck is hiding the ball somewhat—at first glance, it appears to have no comment—the Zocor website was removed (though, to be fair, I’m not sure when it was taken down). It’s a shame they couldn’t use the website to provide comprehensive information to their customers who no doubt have heard the bad news about Zocor and may want some guidance. But for intrepid customers who dig a little deeper, there is a small statement at Merck’s main website, stating that:

But, Merck offers some useful information on the testing that I did not find in news reports or on the FDA’s website. This gives patients something specific to speak to their doctor about:

Muscle pain or weakness in people taking simvastatin should be reported to a doctor because these could be signs of a serious side effect. Doctors may perform blood tests before and periodically during treatment with simvastatin to check for liver problems. People taking 80 mg of simvastatin should receive an additional liver function test at three months.

The prescribing information goes to great lengths to even the playing field between Zocor and other similar (non-Merck) drugs:

Myopathy/Rhabdomyolysis: Simvastatin, like other statins, occasionally causes myopathy manifested as muscle pain, tenderness or weakness with creatine kinase (CK) above ten times the upper limit of normal (ULN). Myopathy sometimes takes the form of rhabdomyolysis with or without acute renal failure secondary to myoglobinuria, and rare fatalities have occurred. The risk of myopathy is increased by high levels of statin activity in plasma. Predisposing factors for myopathy include advanced age (≥65 years), uncontrolled hypothyroidism, and renal impairment. As with other statins, the risk of myopathy/rhabdomyolysis is dose related.

Zocor is made of simvastatin, which is a component in Vytorin and Simcor, and it is sold in generic forms.

We’ll continue to track the increased Zocor injury risks. I really believe a Zocor recall or withdrawal is coming down the pike at some point.

Update: our lawyers are now taking these cases. Get a free consultation here.